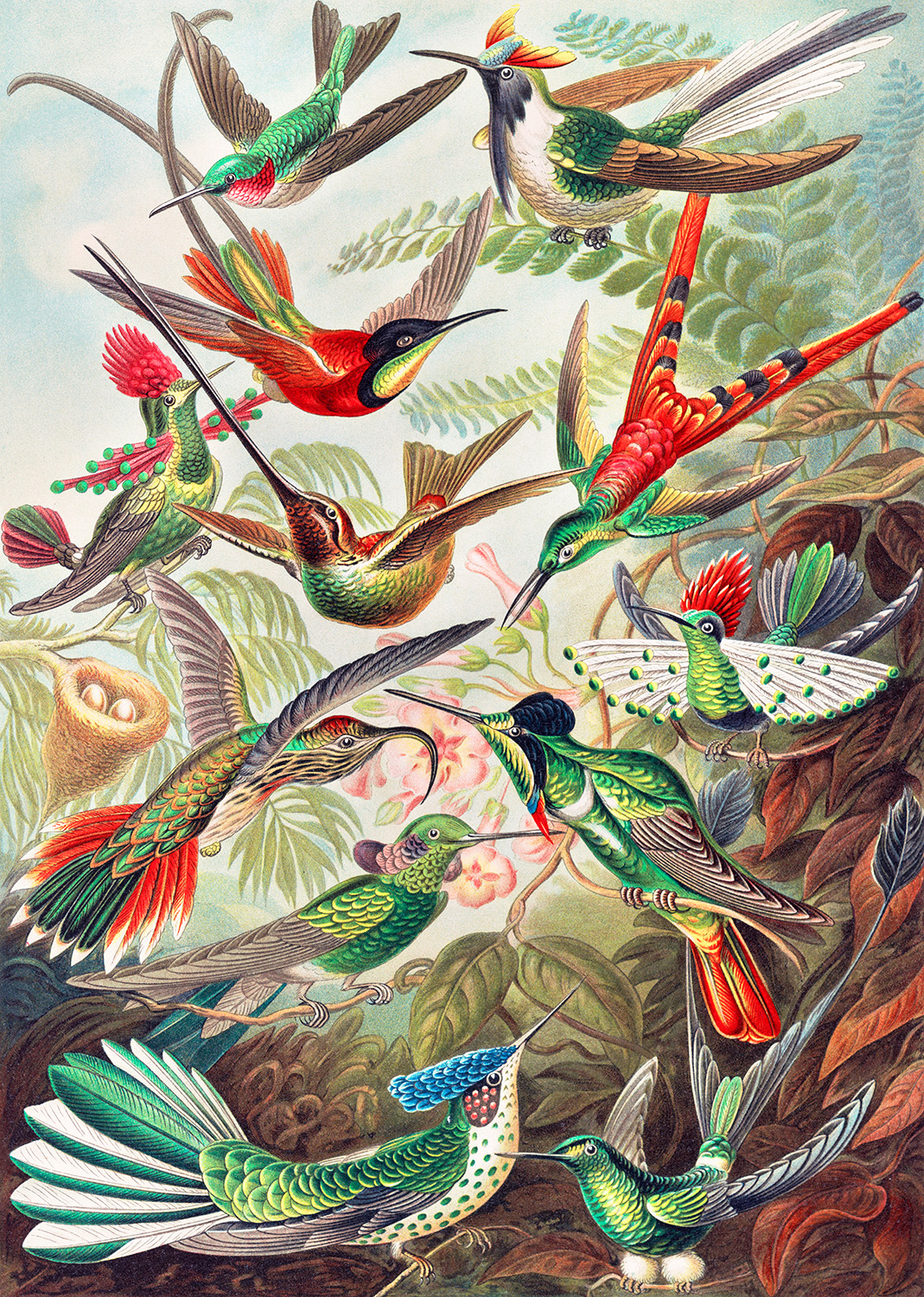 By vallery vydentity12 May 2021No Comments

What fascinates us about Haeckel is that his drawings of microscopic objects are so incredibly detailed and real. Today, we encounter almost exclusively photographs in reference books. Steel engravings and colour lithographs, on the other hand, are a technique from the 19th century, i.e. Haeckel's epoch. But a photograph of a microscopic object cannot show all the details, because the microscope has only a shallow depth of field. Thus, in many identification books you can still find drawings instead of photographs. Why: A micro-drawing not only shows a true-to-scale image of an object, but it also connects the image with the images that take place in the artist's mind. Until the development of photography, it was the job of botanical illustrators and researchers to capture the extensive forms of flora and fauna. And Ernst Hackel has precisely this Microscopic drawing technique perfected. His unique colorful drawings and sketches show in detail how plants and animal life appear under the microscope. His hand-drawn organisms must have taken on an almost futuristic character in his time.

His drawings of the tiniest aquatic creatures or plants enliven every room and it never gets boring to rediscover and study the many details.. His drawings of radiolarians (radiolarians), calcareous sponges, jellyfish and medusae (jellyfish). belong until today to the most beautiful scientific drawings. Haeckel captured the beauty of nature on paper at a time when photographing microscopic minute parts was still an impossibility. It saw biology in many areas related to art.

Haeckel wanted to make the treasures and beauties of the sea accessible to a broader class with his kind of representation, which would otherwise only have been possible by looking through a microscope. Today, this is accomplished with photographs. But the way Haeckel depicted the sea creatures is still fascinating today. 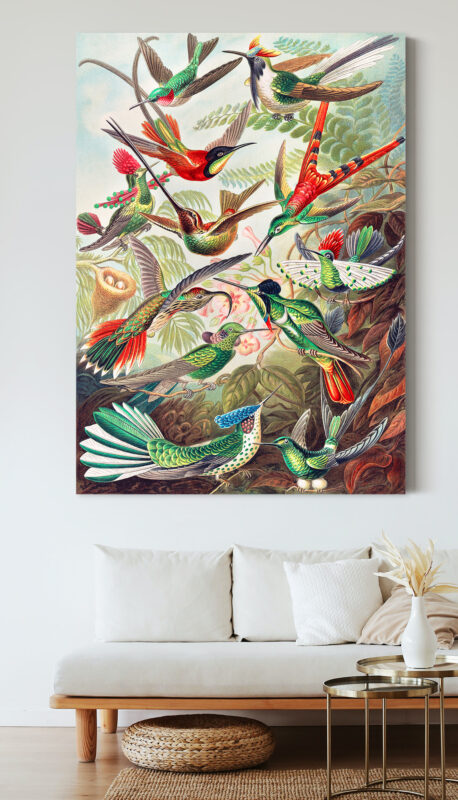 Haeckel's highly detailed drawings from the multi-volume series "Art Forms of Nature" from 1899 to 1904 became a classic during the Art Nouveau period. Many artists, sculptors or architects have been inspired by Haeckel to this day. His drawings are Pleasure for eye and soul and at the same time a Nostalgia trip back to the time of the first microscopic drawings.

A brief outline of life

Ernst Heinrich Haeckel's life was as colourful and varied as his paintings. He was a zoologist, philosopher, free thinker, artist. Many of his scientific and especially political theories were and still are controversial and criticized today. Undisputed, however, is his importance as one of, if not the most important artist and pioneer in the field of microscopic drawings.

Ernst Heinrich Haeckel studied medicine from 1852 to 1858 and habilitated in 1861 with a thesis on radiolarians. He became a professor of comparative anatomy and, as a pioneer in the field of biology, coined terms such as phylum or ecology and devoted large parts of his work to the theory of evolution. In 1866 Haeckel drafted the "Basic Biogenetic Rule", according to which many animals repeated evolution as embryos, like a kind of fast-forward. Only a few years ago this theory was rejected.

Haeckel popularized Darwin's theory of evolution and coined terms such as phylogenesis, ontogenesis, and ecology. For him, ecology meant that man should understand and respect nature and that it should not be subjugated. A very modern approach for his time! Criticism from the church also brought him his attitude that there was no difference between the soul of humans and that of animals.

Haeckel stood for developmental monism and a natural philosophical worldview based on natural science. The main focus of this direction is the placement of man in nature, an atheism or a pantheism in which nature and God are placed on an equal footing. He created a synthesis between religion and science. Haeckel became the head of this new movement, which from 1906 was organized in the German Monist League. His studies on the transferability of racial categories to the social development of man were viewed critically. Haeckel became a representative of a eugenic social policy. Under National Socialism, parts of Haeckel's theses were used by the Nazis for propaganda purposes.

But besides biology, art took a very important part of his life, in which he saw a kinship to biology. During his studies, he observed small marine animals off the coast of Helgoland on an excursion. This was the beginning of a lifelong fascination with natural forms.

After his studies, Haeckel spent some time in Italy, where he increasingly devoted himself to his artistic talent. In 1859 he studied the structures of radiolarians in Messina. Between 1860 and 1862 he published 59 scientific illustrations and refined his technique in microscopic drawing. He spent his life studying flora and fauna. He discovered and named countless new species and described them with graphic accuracy in his detailed illustrations. A great admirer of Haeckel's works was Charles Darwin. 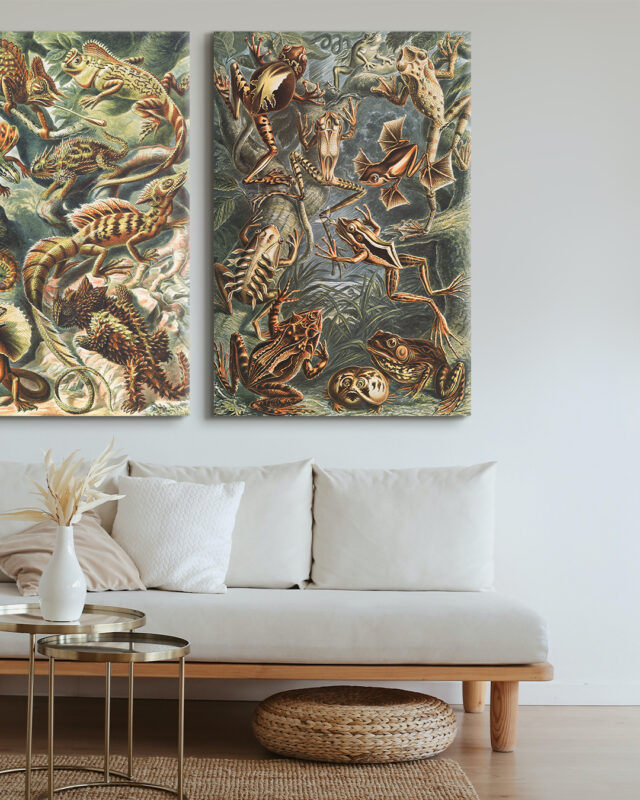 Haeckel's most famous publication is his multi-volume series "Art Forms of Nature" (1904).

Haeckel had to deal with the accusation that his drawings were too idealized. One must bear in mind that radiolarians could not be seen in the microscope with the depth of field that was the case in his illustrations. In retrospect, however, the scanning electron microscope proved Haeckel right. His illustrations anticipated future developments, demonstrating his talent and skill.

Some of our Ernst Haeckel products