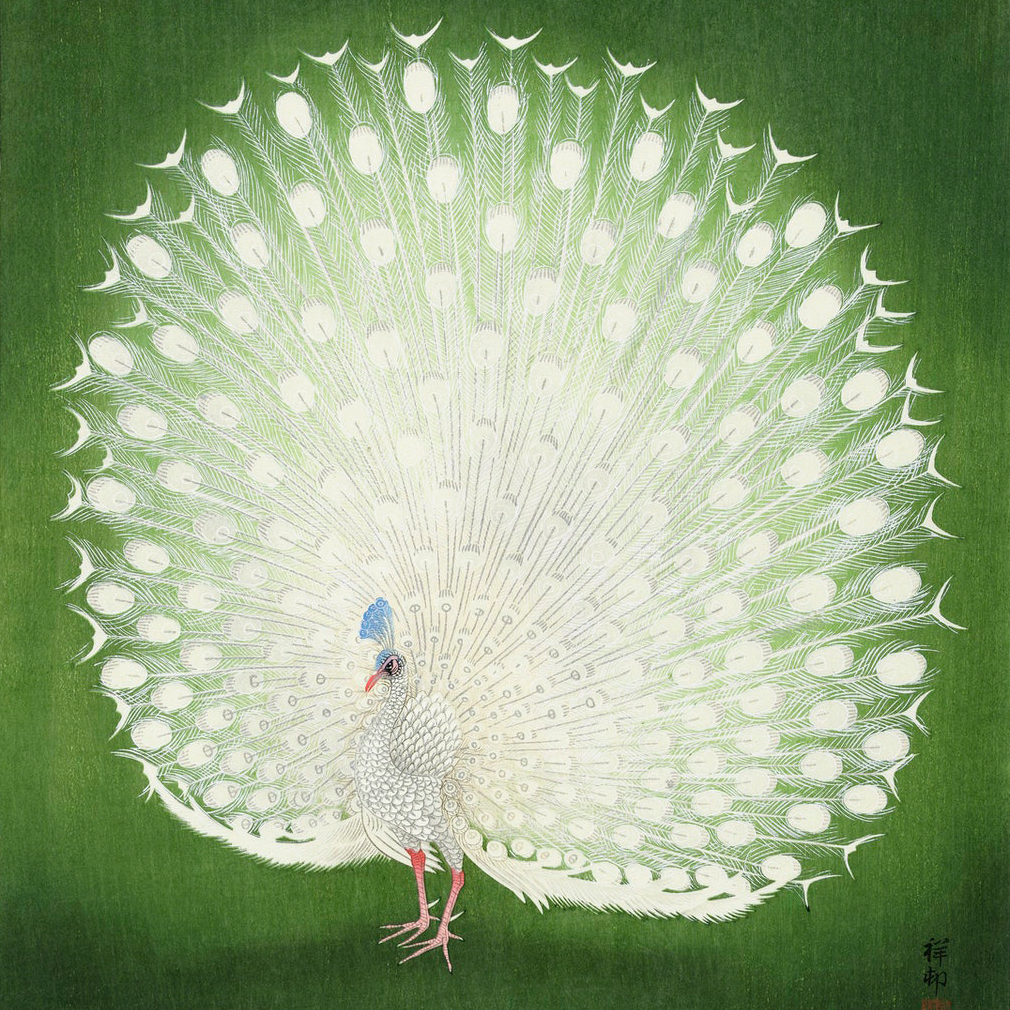 By Sebastian Lochbronner12 August 2021No Comments

The Japanese artist Ohara Koson (1877-1945) stands for the preservation and modernization of classical Japanese art. He devoted most of his works to the style of ukiyo-e (genre of Japanese painting and printmaking) and depicted the animal and plant world in his paintings in a very unique style. He has thereby made a name for himself as a master of Kachō-e, with nature scenes, bird and flower depictions a subgroup of Ukiyo-e, made. In his paintings cockatoos, cranes or peacocks cavort amidst cherry and plum blossoms. Artists of this style show in their paintings how they are overwhelmed by the rich color of a flower or caught by the grace of a bird in the wild. Naturalistic depictions, on the other hand, are unintentional. The viewer is then allowed to give the picture its actual character.

Today we do not know much more about this artist. Koson was born Ohara Matao in 1877 in Kanazawa in northern Japan. He later studied Japanese painting under the master Suzuki-Koson. He was to change his name several times as an artist (Shoson, Hoson, Koson). Koson took a teaching position at the Tokyo Academy of Art at a young age. During this time he also began to study the art of woodblock printing. In 1904/05 he made Russian-Japanese war prints, which was not unusual at the time. The vast majority of ukiyo-e artists had made prints on the theme of Sino-Japanese or Russo-Japanese war. However, these war illustrations quickly became a shelf warmer as photography replaced woodblock prints as a means of depicting news.

Until 1910 Koson mainly created flower pictures with the color woodcut. In the following years, however, he devoted himself increasingly to painting again. It was not until the mid-1920s that, at the suggestion of his American professor colleague Ernest Fenollosa, he again created traditional woodblock prints with floral or bird motifs. Fenollosa was committed to the preservation of the traditional Japanese art Nihonga.

Among ukiyo-e artists, Koson became a master in the field with his distinctive floral and bird motifs. However, especially the art prints from this time were mainly sold abroad. In Japan itself, traditional works were hardly in demand. When students in the 70s again occupied themselves with the work of Koson, pictures had to be bought again from the USA for these studies. In Japan, Koson's paintings have found attention and recognition again only a few years ago.

The Japanese woodblock print originated in China. However, Japanese artists further developed and perfected the technique of this printmaking in the 2nd half of the 18th century. Japanese woodblock prints are unique in the world.
The woodcut is a high pressure technique. For this, parts are cut out of a block of wood in relief with special knives. The remaining raised areas are then painted and printed by hand on paper.
Koson's often very detailed bird and animal graphics almost have the character of watercolors. This may also be due to the fact that Koson originally worked with oil paintings and watercolors. In the Japanese technique of woodblock printing, the watercolor applied with brushes is printed by hand. In the process, the ink penetrates deep into the paper. These woodblock prints then often have great similarities to watercolors. Perhaps "printed painting" therefore fits best as a description of Koson's paintings. In the West, there was a different printing technique: here, woodcuts used a press to print the oil paint applied with a roller onto the surface of the paper.
It is also interesting that Koson repeatedly used different signatures and seals throughout his creative years. This makes a more precise dating of his paintings difficult.
In his later years Koson was a representative of the Shin-Hanga movement, which could be translated as "new prints". The aim was to save the art of traditional Japanese woodblock printing from oblivion. This movement revived the woodblock technique and also modernized it. Thus, for the first time, Western elements such as the light moods typical of Impressionism or the use of perspective were integrated into the traditional Japanese pictorial motifs.
Koson produced about 500 prints by the time of his death in 1945, making him one of the most prolific Kachoga (bird and flower) artists.

Some of our art prints from Ohara Koson